You may have heard the names “Mixolydian”, “Dorian”, or something similar. It looks like something out of this world, right? Well, we will show you that these and other names are, in reality, very simple subjects and easy to understand and practice. They appear in the context of music modes (or Greek modes). But what are them?

This article is organized as follows:

Music modes are nothing more than 7 different models for the natural major scale. Let’s drill down to make it clearer:

Take the natural major scale. It corresponds to the first mode, the so-called Ionian mode. We will show you where this denomination came from later, don’t worry about it now. Okay, you already know a music mode! Congratulations!!

To make it easier, let’s work on the C major scale as an example. We already know what the Ionian mode is:

Tip: It is the major scale itself.

Note: For all modes, we will show the observed sequence, a tip and the scale’s shape.

The next mode is the so-called Dorian mode. It is nothing more than the same major scale that we are working on, but starting from the D note.

Here is the Dorian mode (in the key of C):

Tip: It is the minor scale with the major sixth.

Well, maybe you haven’t noticed the usefulness of that yet. People generally start to get confused here and find this study boring. Well, let’s explain this right so you don’t give up for no reason!

We just played D Dorian, right? This automatically means that key is C major. Why?

Precisely because we built the Dorian scale using the notes of the C major scale. The tone-semitone, etc. format deduced for the Dorian scale was different from the natural major scale because we started with another note and not the first degree. We started from the second degree. This is why there is a difference in the shape. Having understood that, we can find a practical application.

In the study of chords of a key, we show the chords that are part of the C major tonality. Let’s say, for example, that a song starts in Dm and then continues with the chords: Am, F and Em. We can conclude that the tonality of this song is C major, even though the C chord has never appeared in the song (so far, not a new concept!). So, if we want to improvise a solo on top of this song, we will use the C major scale. But, since the song is around D minor, our solo could start with the D note instead of the C note to give a more characteristic ambience, right?

This is where the D Dorian comes in! We can say that we are soloing in D, because we are “emphasizing” the D note (beginning and ending with it), but using the C major scale as a reference.

Moral of the story: we are using the D Dorian scale for our solo, because the chord is D minor, but the key is C. Or we can just say that the key is D Dorian.

Okay, let’s move on. Now we are going to use the C major scale starting from the E note. The sequence will look like this:

This is called the Phrygian mode. The practical use is exactly the same as the previous example, but thinking of E minor instead of D minor. If we wanted to solo in E minor in a song that had the tonality of C major, we would use the scale of E Phrygian.

Tip: It is the major scale with the augmented 4th.

The fifth mode is the Mixolydian mode. On the C major scale, the fifth degree is G. See the scale of G mixolydian below:

Tip: It is the major scale with the minor 7th.

We have already explained the use of music modes from the point of view of improvisation, but it would be interesting to take this moment to make an observation for string instruments.

Okay, there’s no problem with that. But let’s say a song changes in tonality. Imagine that you were in G major and now you are in C major. You were soloing in G major using the scale below, in this section of the instrument’s fretboard:

Now that the song has become C major, you have jumped to this section:

If you knew the shape of G Mixolydian, you could continue in the same section that you were before, but changing the shape that was this one:

This would make the solo infinitely more beautiful and fluid, since the change of tonality in the solo would be very smooth and pleasant.

If, in this example, you change the section of the fretboard to think of the C major scale, you will make this change in tonality much more abrupt and hard to swallow.

Listen to musicians like Pat Metheny, Mike Stern, Frank Gambale and watch how they work on modulations (changes in tonality). This fluidity comes from the complete mastery of shapes in music modes.

In addition, knowing the shapes of these modes well will help you not to stick to one scale shape only, which would make your solo “square” and repetitive. In addition, this skill provides total control of the instrument’s fretboard.

Tip: It is the natural minor scale!

We then found a new name for the natural minor scale: Aeolian mode. The natural major scale had already received a name too, remember? Ionian mode.

The seventh and final mode is the Locrian mode. Check it out below:

Tip: It is the minor scale with the minor 2nd and diminished 5th.

Training music modes with degrees in mind helps our minds and ears to quickly identify the key of a song, as you get used to the patterns.

Great, since we did everything on the C major scale, let’s now quickly show what the sequences would look like using the G major scale (instead of C major), so you can see the shapes of these modes starting from the 6th string:

Other shapes (for string instruments) 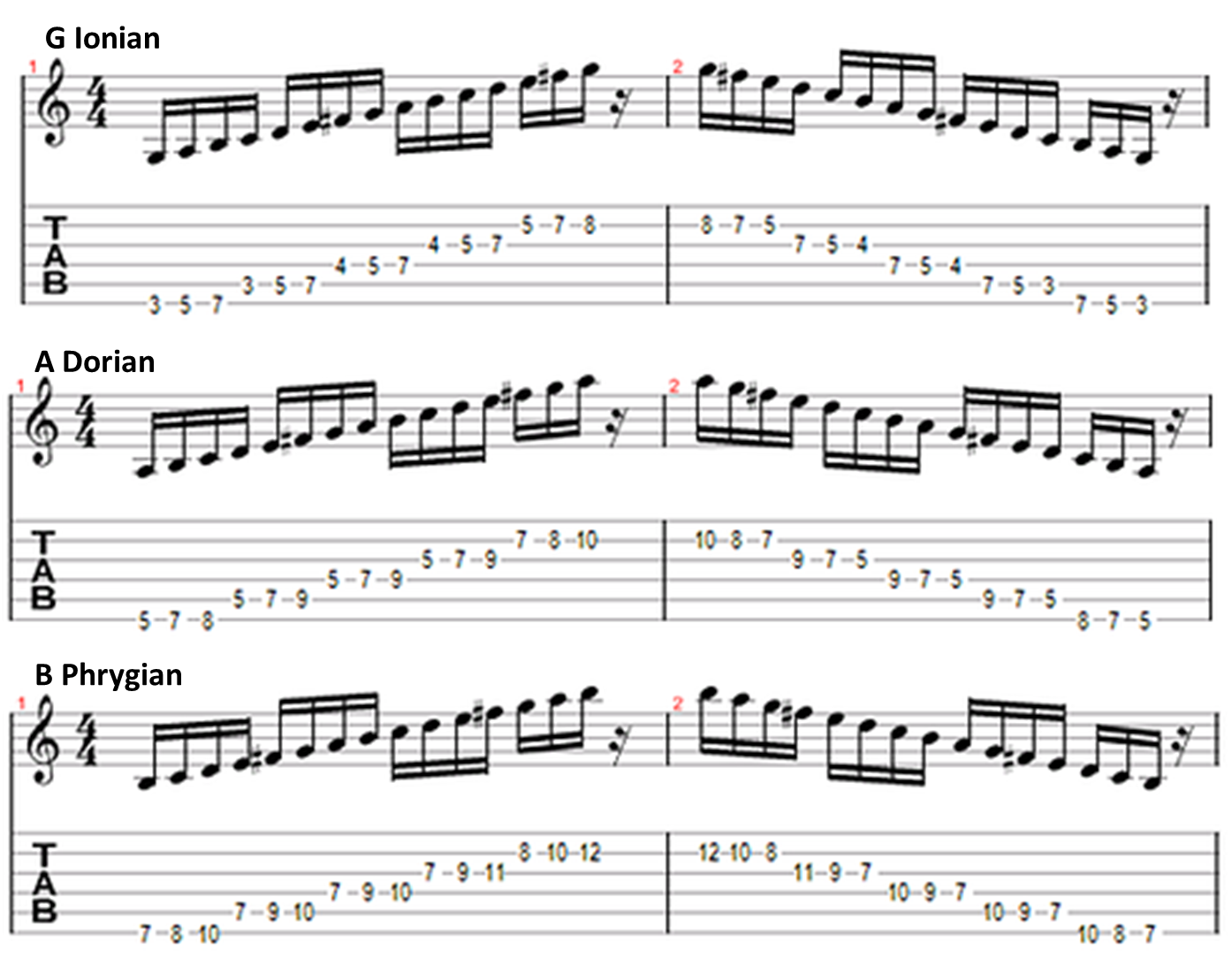 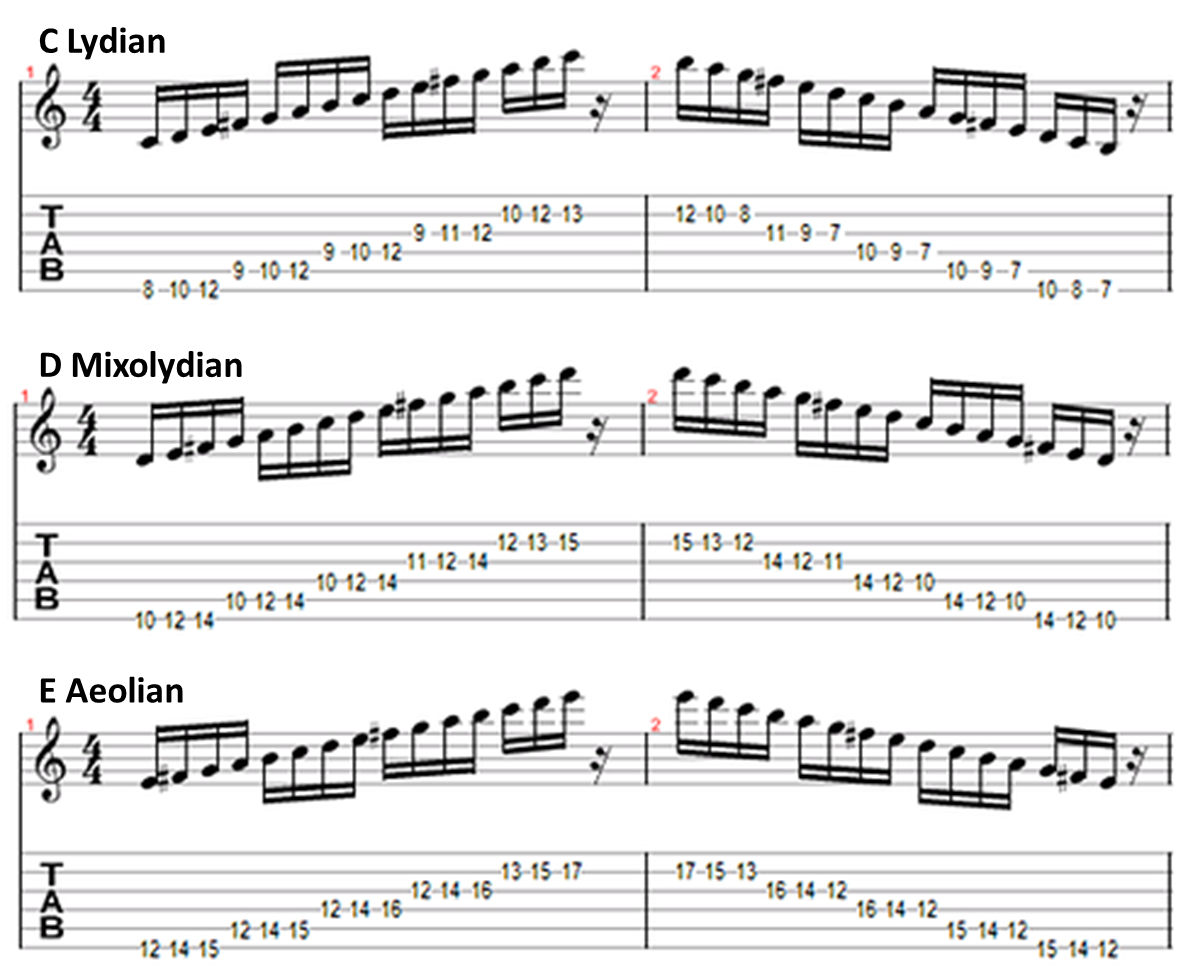 Notice how the sequences (tone-semitone, etc.) were exactly the same as the sequences of our study that used the C major scale. The shapes were different because we were starting from the 6th string instead of the 5th.

These shapes presented starting from the 5th and 6th strings keep the same structure for other tonalities. This is very favorable, since by learning shapes for these tonalities you will learn it for all of them and you just need to transpose the same shapes to other tonalities.

Throughout our musical study, you will hear about these modes more often. Seeing their application in different contexts you will broaden your vision and you will become more and more convinced of their usefulness. The important thing is that you now practice them and spend time on these shapes, understanding where they came from.

Before we finish our first study in music modes, let’s satisfy your curiosity by telling you where these strange names came from.

The origin of music modes

Music modes emerged from ancient Greece. Some peoples in the region had peculiar ways of organizing the sounds of the tempered western scale. These peoples came from the regions of Ionia, Doria, Phrygia, Lydia and Aeolia. That’s why they gave rise to the names you just saw.

The Mixolydian mode arose from the mixture of the Lydian and Dorian modes. The Locrian mode appeared only to complete the cycle, because it is little used in practice.

The Ionian and Aeolian modes ended up being the most used, being very widespread in the Middle Ages. Later, they ended up receiving the names “major scale” and “minor scale” respectively.

The funny thing is that every music student ends up learning the names “major scale” and “minor scale” first, even before hearing about Ionian and Aeolian modes, even though the Greek modes came before that and are the parents of these scales.

How to use modes (Modal Music)

Another very common application for music modes, mainly in styles related to jazz, is modal music.

In the Cmaj7 chord, we can think of using the C Lydian scale instead of C major (C Ionian). We have already seen that the difference between the Ionian scale and the Lydian scale is just one note. What would tonal music tell us about this idea?

Tonal music would say: “If you want to use the Lydian scale in this case, the note that characterizes this scale needs to be used quickly, as a passing note, after all it is not part of the C major scale”.

Modal music would say: “Emphasize, characterize, rest on the note that identifies the Lydian scale, to make it very clear that you are playing C Lydian, not C major”.

Did you notice the difference? Modal music will always try to deliver the “flavor” of the mode in question, no mattering if it will decharacterize the key of the song or the harmonic function.

So the logic is as follows: about the progression | Dm7 | G7 | Cmaj7 | you can think of playing the C major scale on the Dm7 and G7 chords (nothing new so far), but when you go to Cmaj7 you try to play the C Lydian scale (emphasizing the F# note, which is the note that characterizes this scale in this case). This will provide your solo in a modal characteristic, making the listener think that the tonality has changed (after all, C Lydian is equivalent to G major). This experience is very interesting and used a lot in jazz.

Imagine that we can do this for other chords, thinking about the major and minor modes. For example: I can play the Dorian scale on a minor chord.

In practice, the most common in jazz is to use the Lydian mode on major chords and the Dorian mode on minor chords. In addition, of course, to the mixolydian mode in the dominant chords. So as a homework topic you can practice these modes a lot and invent some phrases that emphasize the notes that characterize them. This will bring interesting characteristics to your improvisations!