The pentatonic scale is the guru of improvisers. And it is not difficult to find out why everyone uses this scale to exhaustion: it is easy to do and easy to apply. A few decades ago, some musicians made millions on just playing that scale.

Today it is not so easy to get rich by playing the pentatonic scale, after all, any beginner musician already learns to use this scale (and usually spends the rest of his life doing just that).

What is pentatonic scale?

So let’s understand what this scale is. The concept is very simple: the major pentatonic scale is a collection of notes from the major scale.

Okay, it is a reason for celebration: the pentatonic scale has notes that when played generate a pleasant melody, even if it is only the execution of the scale up and down. This makes everyone’s life easier!

The pentatonic scale played back and forth is cool, from front to back it is also cool, from middle to end, from end to beginning, from beginning to middle, cool, cool, cool.

Okay, if you’ve never heard the pentatonic scale in your life, go to a keyboard or piano and play the black keys one after the other. This is the sound of a pentatonic scale.

There are many shapes for pentatonic scales; this example of the black keys was just one that facilitates observation because it is very practical. If you don’t have a keyboard, don’t worry, we will explain in detail how this scale is formed.

A shape for the C major pentatonic scale can be:

Now see a shape for the A minor pentatonic scale:

Compare these scales (C pentatonic and A minor pentatonic) with the scales of C major and A minor, respectively. Note that the major pentatonic took 5 notes of the major scale, as we have already commented, and these were degrees 1, 2, 3, 5 and 6.

Note: The normal thing would be to start and end with the same note in the shape of a scale, but we prefer to end the scale with another note here in these shapes so that you understand the logic of the scale on the fretboard.

We chose to show the C major pentatonic and the A minor pentatonic because these two scales contain the same notes. A minor is relative to C, remember?! If this is not in your blood yet, go back and study the relative minor, apply it, then continue your journey, because accumulating knowledge not to use and then forget it is a total waste of time! It would be more worthwhile to spend your time watching Netflix or playing Angry Birds…

Pentatonic scale on the Piano/Keyboard

See an example of the major and minor pentatonic scales on the keyboard below:

How to use the pentatonic scale

We strongly recommend that you take the opportunity to also practice the pentatonic scale within blues, as it is a lot of fun! Spend hours and hours, days and days doing this, and you will become a natural improviser.

How to practice pentatonic solos

But how should you practice the pentatonic scale to make progress and enjoy what you are doing? Follow these steps:

Step 1: Memorize the minor pentatonic scale well and apply it in the tonal context. That is, you can play with this scale within a minor or a major key (playing the pentatonic of the relative minor, in this case). Do this for quite some time.

Step 2: Apply the minor pentatonic in the context of blues, after reading the article “Introduction to blues“. Do this for quite some time.

Step 3: Now that you are quite familiar with the minor pentatonic, memorize the major pentatonic and apply it in the tonal context as well, just as you did in step 1.

Then, we will do this same pentatonic scale, only now starting from the A note. There is nothing magical about it, we will play the same notes that we played before, we will just be starting at A instead of starting at G. Then we will do the same for the other degrees (because on the string instruments the shapes are different). Check out the shapes below and memorize each one well: 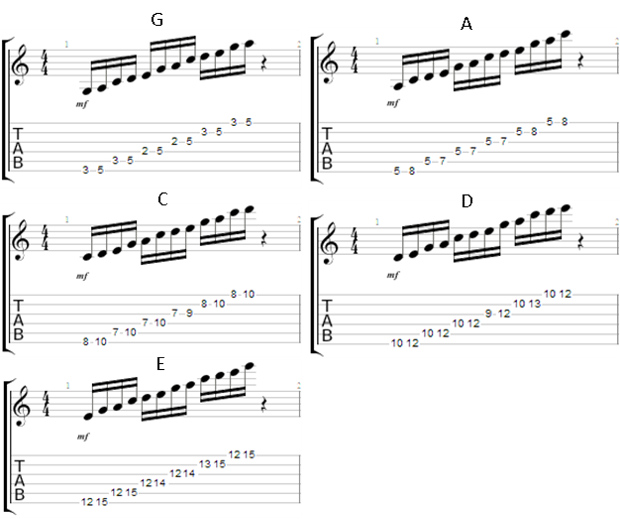 This is the same idea we had to form the musical modes. In the case of the modes, there are 7 notes on the scale, so starting with each degree results in 7 scales. Here at the pentatonic we had 5 scales.

Now the mission is to practice in the same way that you did in the previous steps. Apply these shapes in tonal and blues contexts.

Okay, you already have material to study for months and months! Your resourcefulness in improvisation is taking shape. If you only master the concepts we have covered so far you will be able to improvise on the vast majority of the songs there are. So don’t waste your learning! Put it into practice!

If you would like to improve your guitar skills quickly, try Guitar Tricks for free. It is the best platform we know.

Go to: Introduction to Blues