How to read Sheet Music

Whoever wants to know and understand music probably dreams of learning sheet music, after all this is the most complete musical writing in existence. Furthermore, when a musician confesses not knowing sheet music, he usually ends up losing his reputation, and this is very inconvenient.

The problem is that learning sheet music through books is very complicated, because the explanations are difficult to comprehend. Our goal here is to end this problem. It is possible to learn sheet music, and it is not difficult! We will explain everything now and show how much you will benefit from this knowledge.

Sheet music records harmonic, rhythmic and melodic ideas. So, as you read this chapter, you will possibly remember the moment when you learned the alphabet. Just as you have memorized the sound of each letter, you will also need to memorize the way each note is represented on paper. In the end, you will be mastering a new language. Let’s start:

The Staff is the region where we write the musical notes. This region is formed by lines and spaces. Each line and space is used to represent a different musical note. In the figure below, you can see the lines (1st, 2nd, 3rd, 4th and 5th):

Notice how there are 5 lines on the staff. It is also possible to create more lines to reach other octaves (the first C note in this example, as well as the last A note, are on extra lines, also called “ledger lines“). We will talk about these extra lines shortly, for now just note that each line and space are used to represent a different note in sequence.

Musicians, throughout history, have chosen different positions for notes in the lines of the staves. That is why the clefs, symbols that would serve to signal the note and the reference line that were adopted, were invented.

The most widely used clef for guitar, piano and voice is the treble clef (or G-clef). It received this name because it says that the note on the second line will be called G. Notice how the drawing of the clef itself begins on the 2nd line (indicated in red in the figure below). Very well, now that you already know where G is, you can register all the other notes following the same logic that we saw above:

Note: You may have realized that the first thing you need to know to read sheet music is the sequence of notes, all memorized, backwards and forwards!

Now let’s clarify what is the relationship of these dots on paper with the instrument. The figure below shows the octaves of an ordinary piano. Notice how each C has a different position on the staff, depending on the octave it is on. We will use a number next to the letter C (for example: C3) to say which octave it is in:

Note: This central C (C4) is the C that is located right in the middle of the keyboard or piano.

For you to locate yourself even further, we are going to enlarge the octave highlighted in red (central C) and show the matching instrument notes registered on the staff: 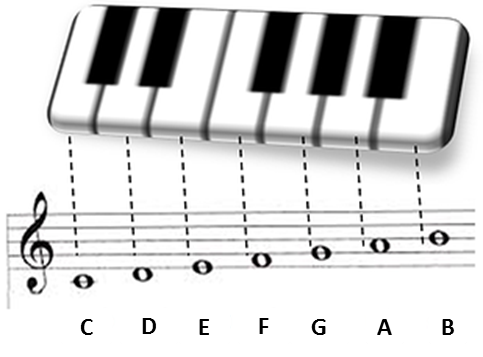 On the guitar, the central C is located in the third fret, fifth string:

Note: The sheet music for the guitar is shifted in one octave in relation to the piano. In reality, the central C of the piano corresponds to the pitch of the C note on the second string of the guitar. This displaced definition was chosen to facilitate writing, because if it were not so, writing on the guitar would need many additional lines (ledger lines) to represent the simpler and more common chords.

The correct way to represent sheet music on the guitar is to place the symbol “8” on the treble clef, indicating that the representation is shifted by one octave in relation to the central C of the piano:

But not all writers use this symbol, so pay attention to the instrument in question to locate yourself correctly.

Back to: Sheet music guide

Check out our list of sheet music lessons below: