What are augmented, diminished and perfect intervals?

If you read the article about degrees, you noticed that we only mentioned 7 notes of Western music (C, D, E, F, G, A, B). But what if we wanted to use a degree reference for the other notes as well (C#, D#, F#, G#, A#)? For this, there is a more comprehensive definition, as we will see now:

Major intervals are long and minor intervals are short. Note that, in the previous example, the “major second degree” represented the interval of a whole tone (because D is two semitones above C), and the “minor second degree” represented the interval of a semitone (D flat is a semitone above C). Therefore, these names were given only to give an indication of the distance between the notes.

Expanding the concept to all notes, starting from C, we have the following: 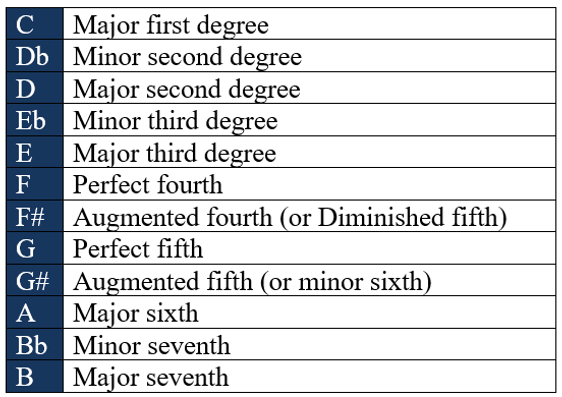 You are probably wondering why on Earth there are the denominations “augmented “, “perfect” and “diminished“. Well, know that it’s just a definition, and it’s that language that you’ll find in any music theory book or song book.

But couldn’t we just use the names “major” and “minor” for all the notes instead of using “diminished”, “augmented” and “perfect”? Yes, we could. So why are there other denominations? In the more advanced topics you will understand that this turns out to be quite useful. For now, just memorize these nomenclatures and what they represent. As you have seen, there is no mystery, they are just names given to specific distances.

We will now exercise this nomenclature starting from other notes besides C (using only sharp notes): 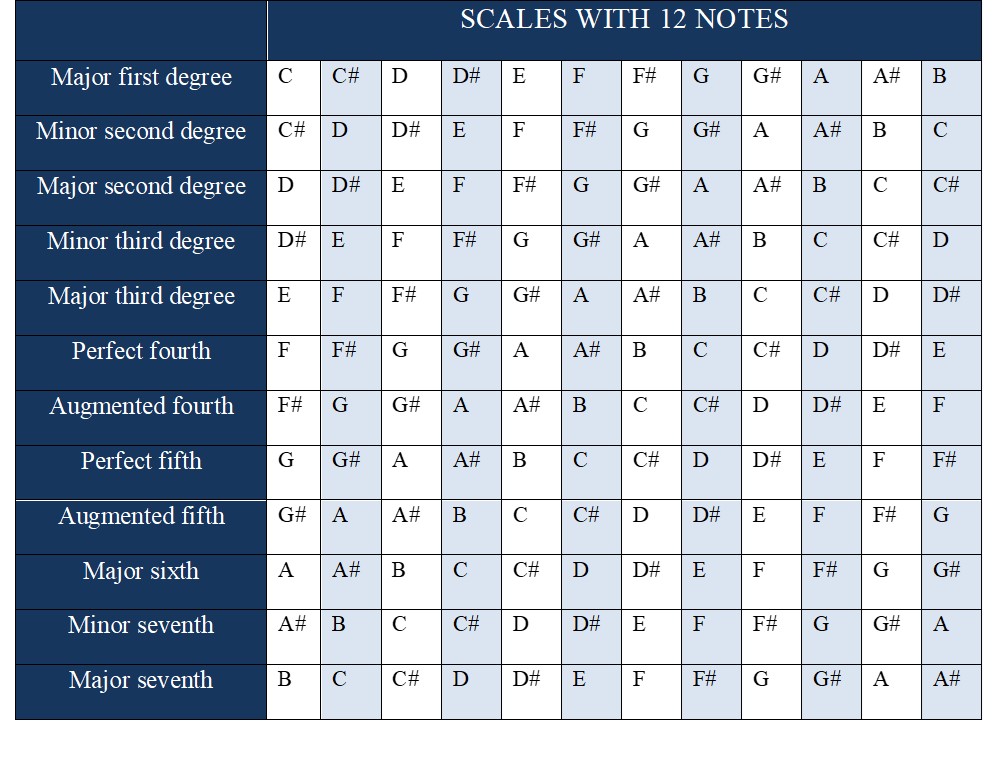 From the seventh degree, the notes begin to repeat themselves, since the 8th degree is already equal to the 1st degree. According to this logic:

You must be asking yourself: if there is no need to speak of degrees after the seventh, because it is repeated, why then are the 9th, 11th and 13th notations used??

Well, some musicians prefer to use these degrees to make it clear which octave should be used. For example: if you see only Cm6 in a chord notation, you will probably form the C minor chord and take the nearest sixth degree to form Cm6. Now, by writing Cm13, you would know that you should use the sixth degree one octave above, not the nearest sixth degree. The only difference between these two chords is a slightly different sound due to the octave used for 6th degree (in the next topics, we’ll talk about everything you need to know about chords and chord notations, don’t worry if you haven’t understood this example).

It is important to know details like this so as not to be in doubt about these nomenclatures.

Okay, now let’s talk about the practical usefulness of this notation we just saw!

We can refer to any note we want based on some reference note, just as we did in the article “What are degrees?”. We will take the same principle here as in the previous article, since we are only complementing the subject.

However, we worked on the C major scale before, because by saying only “3rd degree”, “6th degree”, etc. we were not specifying whether the degree was major, minor, perfect, diminished or augmented. Therefore, it was necessary to say that the degrees would be according to the format of the major scale. It will no longer be necessary to link to a scale, as we will specify each degree separately. See some examples below (exercises):

You can check these answers with the table that we showed earlier.

Note: For now, we are only talking about notes, not chords! The denominations “augmented” and “diminished”, as well as the denominations “major” and “minor” also appear in chords, but that’s another approach! Be careful not to confuse things, here we are only talking about notes and their isolated nomenclature. When it comes to chords, nomenclature has another purpose. That is why this distinction is important. Keep that in mind.