As already mentioned in the topic “harmonic functions“, the dominant chord has a tense sound. This tension occurs due to the existence of a tritone.

But what is a tritone?

We call the interval of three whole tones between two notes a tritone. That is, when we simultaneously play two notes that are three tones apart, we are playing a tritone. An example of a tritone is between the notes F and B:

The tritone effect provides one of the most complex dissonances in Western music. Its sound gives the idea of movement, instability, and when it is not accompanied by a rest chord, the listener is distressed, tense, after all, the tritone “needs” to be resolved.

That is why many suspense melodies in famous horror films contain only two notes and are a great success. You only need to put tritones playing intermittently and the person begins to feel afraid.

Every dominant chord contains a tritone, after all the tritone is responsible for the sensation of “tension” of the dominant function.

Let’s look at some V7 chords (fifth degree with minor seventh) for you to check it out.

Notice, for example, the notes that make up the G7 chord: G, B, D, F. Between B and F we have 3 tones distance.

Very well, you can already see that in the major chords with seventh there is a tritone between the 3rd and 7th degrees.

The chromatic effect of the tritone

An important thing to emphasize is the chromatic effect produced by that tritone. In the case of G7, which solves in C major, the notes B and F are a semitone below and above, respectively, the fundamental and the third of C. In other words, there is a chromatic effect that makes this chord “lead” to C, as if there was a need to solve it.

Another type of chord with a dominant function is the minor seventh and flat fifth chord, (Remember? This chord appears in the seventh degree of the major key, known as the chord half-diminished).

Note: The half-diminished chord will not always act as dominant. Depending on the context, it may act with another function (we will see this in later studies).

Well, maybe you’re wondering: “Why on earth is the title of this topic devil in music?!”. Calm down, we’ll satisfy your curiosity now: 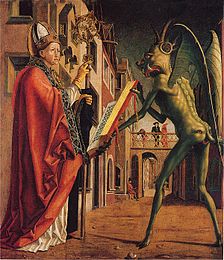 There is a myth that the tritone has already been banned by the Western Catholic Church for causing too much tension. This dissonance would be seen by the church as evil, as it was believed that the perfection of God was translated into harmonic sounds, not disharmonious sounds like the tritone.

A lot of people spread the concept that in the Middle Ages the tritone was called “diabolus in musica“, as if it were expressly forbidden to be played (threatening composers to be burned at the stake).

In fact, the term “diabolus in musica” exists in historical records, not in the sense of prohibition, but in the sense of difficulty. It was like a warning that this interval was difficult to reproduce in singing, that’s all.

In fact, there are several Gregorian chants and songs from the middle ages practiced in cults that used the tritone. This proves that the concept of the tritone being banned is nothing more than a rumor or misunderstanding that ended up spreading and being repeated. There is a great video of Adam Neely about this topic, check it out.

Let us return to the case of the dominants…

We know that the Mixolydian mode is formed by the degrees: major 1st, major 2nd, major 3rd, perfect 4th, perfect 5th, major 6th,  minor 7th. Therefore, an unaltered dominant chord is the V7 chord that has the chord notes (1, 3, 5, 7) and/or any of the above extensions (major 2nd, perfect 4th or major 6th).

If the V7 chord has any of these altered extensions (2nd minor, diminished 4th, augmented 4th or minor 6th) or the augmented 5th or diminished 5th chord note, the chord will be an altered dominant.

For example, the G7(#5) chord is an altered dominant, as it has an augmented fifth. The G7(b9) chord is also altered because it has a flat ninth (or minor 2nd, for those who prefer). The G7(6) chord is not altered, as it has a major sixth, which is part of the natural Mixolydian scale.

This nomenclature is useful because the dominant chord allows for many resources in improvisation. Altered dominants have a slightly different approach than unaltered dominants due to the different sonority of their structure. In the scale application articles you will see these differences.

A term also widely used for altered chords is the so called “dissonance“. The meaning of dissonant is that which needs to be resolved, or also something that is foreign to the original tonality. The term “consonant” means exactly the opposite: stability in relation to the tonic.

Speaking a little about ambience, songs loaded with tension have many tritones, such as the 5th Symphony of Beethoven’s 1st movement, for example. Heavy Metal is also a good example of musical style that has incorporated the dominant function in its basic harmonies.

However, the dominants are not restricted to heavy music; they appear in several places, even in quieter songs, followed by resolutions in the tonic.

Check below some classical examples of tritone being used a lot:

The Danse Macabre begins (0:17) with a violinist playing the notes A and Eb (which form the tritone interval).

In Even Flow (Pearl Jam), the first two notes in the vocals create a tritone (Fre–ezin):

Another intro example: The Ride The Lightning (Metallica):

Using the dominant to make modulations (tonality changes) is another extremely common application, which makes this type of chord one of the most explored in current music, and perhaps the most studied by academics.

If you want to be a good musician, the dominant chord needs to be part of your vocabulary and repertoire. You are already taking a big step towards this goal by reading this article. The Simplifying Theory team is here to show you the way.