What is a diminished chord?

The diminished chord is the chord formed by the following degrees:

Let’s form a chord to see how it looks.

The most used symbol for the diminished chord is a little circle above the letter of the chord: C°. But some authors also use the “dim” notation: Cdim

This gives a very particular characteristic: this chord is repeated every three semitones. In other words, if you form a diminished chord on the fretboard of the guitar, keyboard or any instrument and then move that same chord three semitones up or down, the chord will remain the same!

The only thing that will change is the location of the notes in relation to the fingers, but the chord as a whole will have the same notes, that is, it will be exactly the same. Check the C diminished chord and its respective notes below: 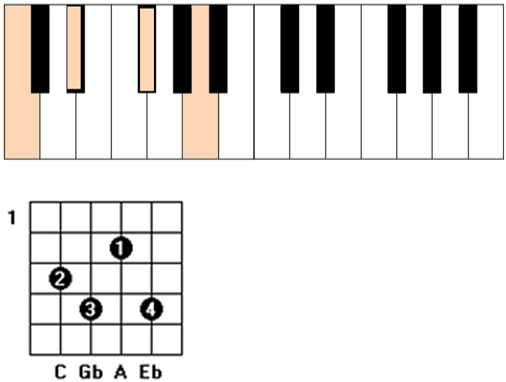 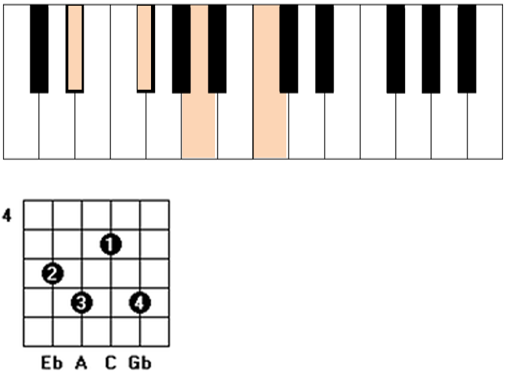 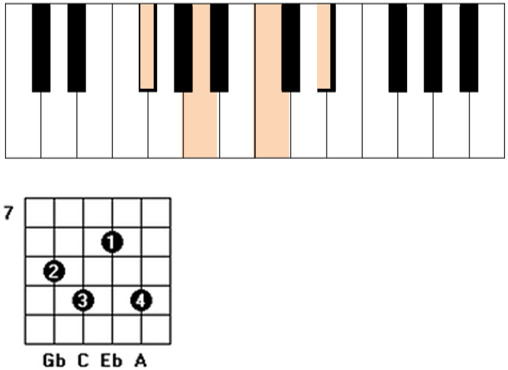 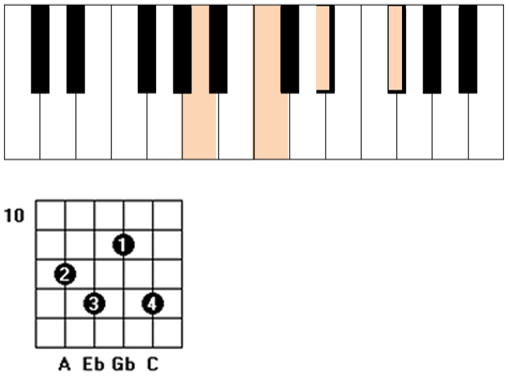 This is very convenient, because if we want to play, for example, A°, we can play C° (since it is the same chord!). This is useful if we are playing in a region of the instrument where the Cº chord is closer than the Aº chord. In another situation, the closest and most convenient chord to play can be D#°, so we can play it instead of A°. Cool, isn’t it?!

Notice now that, as there are 12 notes on the tempered scale and a diminished chord corresponds to another 4 chords identical to it, we can conclude that there are only 3 different diminished chords. They are: C°, C#° and D°.

The remaining diminished chords are a consequence of these 3 chords:

Okay, so we already know how the diminished chord is formed, it’s time to analyze it from the point of view of harmonic functions and general applications. Are you ready? So let’s go:

The harmonic function of a diminished chord

The diminished chord has two tritones. They are between:

Well, if it hasn’t already been made clear, the diminished chord has a dominant function! Having two tritones is no small feat, is it?! So, we can use it to replace dominant chords (like the V7, for example).

How to use Diminished Chords

We can exchange the V7 chord for the diminished chord located one semitone above it. For example, the G7 chord could be replaced by the G#° chord (or its equivalents B°, D° and F°). Here is an exercise for you: check the G#° notes and compare them with the G7 notes.

You will see that the G7 tritone is present in the G#° chord, which makes this substitution possible. This is one of the applications of the diminished chord, to serve as a dominant chord option. See an example of replacing the G7 chord with a diminished chord below:

Other application: The Auxiliary Diminished

When the diminished chord has the same bass (lowest note) as the chord it resolves, it is called the auxiliary diminished. Examples:

The auxiliary diminished slows down the resolution and provides a minimum harmonic movement, since it keeps the bass.

Maybe you are now confused, after all we have already stated that the diminished chord has two tritones, so how does the descending diminished not act with a dominant function? After all, it still has two tritones! Well, just as a reminder, the concept of tritones refers to a need for resolution.

When we play a tritone, the need arises for this “tense” interval to be resolved, and the expected resolution is to make each note of that tritone move one semitone. For example, the tritone of the G7 chord is between the F and B notes. When the F note goes a semitone down, it becomes E, and when the B note goes a semitone up, it becomes C. Therefore, the expected chord to resolve this tension is the C chord, which contains these two notes found (C and E, first and third degrees of the chord, respectively).

If the G7 chord resolved in a chord other than C, we would have a deceptive resolution. So far, no new concepts here.

Now, imagine that a song is in the key of B major and the chord sequence G7 – F#7 – B appears. In this case, the F#7 chord is the dominant that resolved in B major, while the G7 chord acted as a chromatic approach chord.

It would not be incorrect to say that G7 was a dominant that had deceptive resolution, but its main function in this song would be the effect of chromatic approach, not least because the expected resolution of G7 is C major, which does not belong to the key of B major.

In other words, it does not make much sense to think of G7 as a dominant that was starting a modulation and suffered a deceptive resolution if it provided another effect for the song, regardless of this one.

We will now analyze these two approaches (ascending and descending diminished) and discover which ones are most used when the chord you want to resolve is major or minor.

The descending diminished is often replaced by SubV7 (we will talk about this chord in the next module) when the intention is to explore this chromatic effect for major chords. It is up to each musician to define his tastes.

Generally speaking, the ascending diminished is the most common function of the diminished chord in songs, especially for minor chord resolution.

In both cases (ascending and descending), the diminished chord appears as a passing chord.

Practice this concept and include diminished chords in your music arrangements!