We’ve already learned how to form triads, tetrads and all possible extensions in chords, so it’s time to work on the so called inversion. We already introduced this concept in the chapter covering how to name chords. Now let’s explore this concept further.

Therefore, we have three possible inversions (related to the notes that form the tetrad): we can put the third, fifth or seventh on the bass.

In the second inversion, the lowest note is the fifth.

In the C chord, the fifth is the G note. Therefore, the C chord on the 2nd inversion is C/G. Check some shapes for this guitar chord below:

In the third inversion, the lowest degree is the seventh degree. This inversion needs special care when the seventh is major (7M), as it is located a semitone below the fundamental (1st degree). This can generate a sound discomfort due to this “chromaticism“, as this short distance can give the feeling that we are “missing” the bass by playing the tonic a semitone above what it should be. When the seventh is minor, there is no such problem.

See below an example of the 3rd inversion for the Cmaj7 and C7 chords (where the major 7th is the B note and the minor 7th is the Bb note):

Note: there are countless different shapes for forming inverted chords on the guitar; we show you just a few here to introduce the concept. Try to find other shapes for these chords that we showed you and also look for inversions for the other chords! Your homework will be to work on this.

Great, you may have noticed that the inverted chords have a slightly different sound than the original chord, because the bass is a very striking note.

This represents a great opportunity for you to vary the sound of the songs. Try playing a song you know doing all the chords in the first inversion. Then do the same using the second inversion. In addition to being a great exercise, this is the best way to memorize the shapes of these chords. Practice this with several songs and the inverted chords will soon become part of your musical vocabulary.

To compose music, also try inverted chords instead of traditional ones, as some sequences and progressions can be more beautiful and interesting. This acquired knowledge will expand your ideas!

On the keyboard, working inverted chords is very common (students learn this in their first few lessons). On the guitar, since it is a bit more difficult to “search” for inversions and there are many options of different shapes and structures, most teachers end up not even teaching this, as if it were not useful.

Since very few people explore the concept discussed here, musicians who make inverted chords on the acoustic or electric guitar call people’s attention. It seems like the guy is playing crazy incremented chords, because the format of the inverted chords is different, unusual, and the sound produced is charming.

Therefore, if you want to stand out by playing only triads and tetrads, here is a simple resource.  In the future, in more advanced topics, we will use inverted chords to work melodic lines with the bass. For now, try to get used to them, applying them whenever possible.

Practical application on the keyboard/piano

Keyboard players in general use the concept of inversion a lot. But how do you know which is the best inversion for each moment of the song? 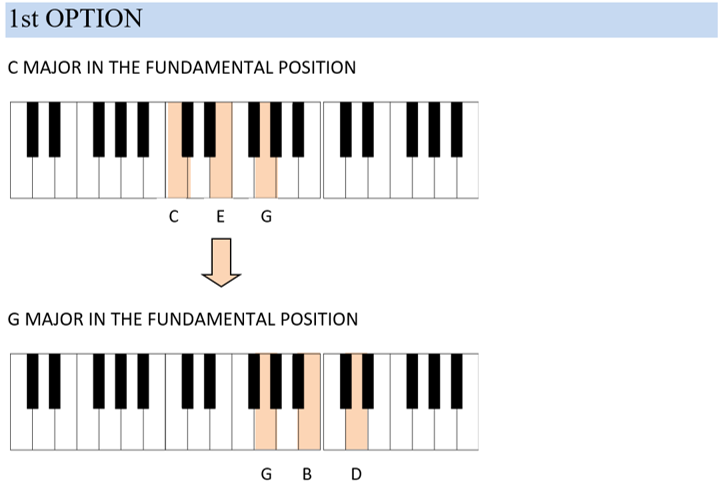 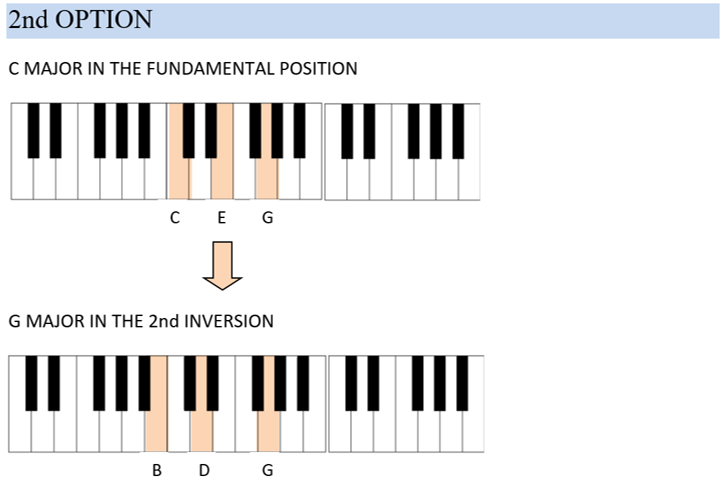 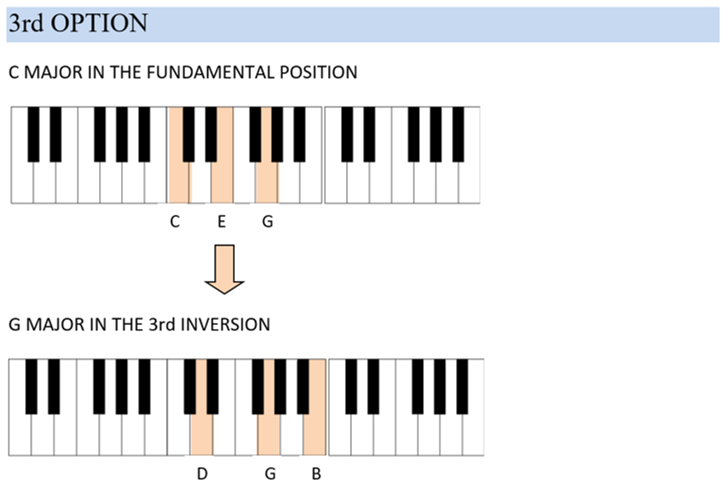 There are some factors that influence the choice of the best option, such as the harmonic functions and the bass of the song, but in general the keyboardists choose the option in which the notes are closer to the notes of the previous chord.

In the examples above, the 2nd option is the closest:

Notice that the distance we had to change in the transition between the two chords is one semitone + two semitones.

Let’s compare it to the first option, in it we had:

If we are going to analyze the passage of each note, in the first note we are already faced with a very big “leap”.

Only in this first transition of notes could we discard the 1st option in relation to the 2nd option.

Finally, let’s take a look at the 3rd option:

Obviously, you don’t have to keep counting all the distances until you choose the best transition on the keyboard, just look briefly and find which of the inversions is the closest. By memorizing all the chords in your inversions well, this process will become automatic.