Now that we have introduced the concept of cadence, we will continue our learning by dividing cadences into 5 different types: perfect, imperfect, plagal, deceptive and half cadence. Each one of them has some peculiar characteristic and deserves to be analyzed separately.

The most important thing about this study is not to memorize all the names involved in this topic, but to observe the sensations that are possible to achieve! We will do our study on the key of C major.

will be used to represent the idea of harmonic conclusion. So here we go:

It is the one formed by the “V – I” progression (Dominant – Tonic), therefore it is the strongest. When it comes preceded by a subdominant (II or IV degree), it is also called authentic cadence. Examples:

It is also formed by the “V – I” progression (Dominant – Tonic), but here one or both chords appear inverted, which weakens the feeling of the progression. Examples:

1st inversion of the tonic

1st inversion of the dominant

1st inversion of both tonic and dominant

A cadence is also called imperfect when the dominant is the VII degree instead of the V degree. Example:

Is when a subdominant chord resolves directly in the tonic, without passing through the dominant. It can be a II – I or IV – I progression. Examples:

This type of cadence can also appear with one or both inverted chords, for example:

Is when a deceptive resolution, that is, the dominant is followed by any chord other than the tonic. This cadence has the so-called “surprise effect” and is not conclusive. Examples:

A deceptive cadence can also resolve in a chord that does not belong to the original key, which would characterize a change in tonality (modulation). Some authors call this progression a modulating deceptive cadence, or just “modulating cadence”. Example:

It is when the song (or part of a song) rests on a dominant chord, that is, the dominant does not resolve on anything, leaving the cadence “empty”. Examples: 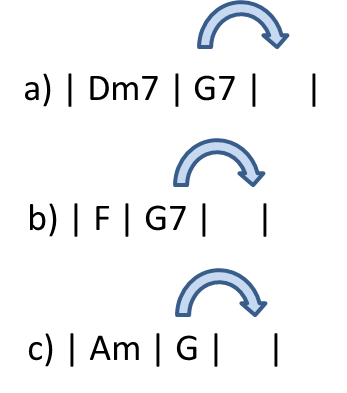 Okay, so we finished our study on cadences. From now on you will hear a lot about them, but don’t worry, we will not stick to the nomenclatures associated with each cadence, but to the effects caused, explaining each case in detail. After all, music should be taught as music, not as a boring report of rules and definitions!

Go to: Circle of fifths