What are Closely Related Keys?

Closely related keys are keys that have some affinity among them for having many common notes. This affinity represents a possibility of modulation, and this is what makes this study attractive.

We will first introduce the types of existent closely related keys and then we will talk about each one in detail:

1) Closely Related Keys – Have only one or no accidentals related to the main key.

3) Parallel closely related keys – They have the same tonal center among them.

First, let’s talk about the closely related keys. The degrees that have only one accidental note related to the main key are the IV and V degrees. The sixth degree has no accidental notes. As usual, let’s check these affirmations.

Take for example the key of C major. The fourth degree is F major, the fifth is G major and the sixth is A minor. Please see the scales of each one of these tones below:

Notice how the fourth and fifth degree scales (F and G) have only one accidental note (Bb and F#, respectively) in relation to the main tone (C). The A minor scale does not have any accidental notes, since it is the relative minor. Since each of these degrees (F, G and A) has a different harmonic function, we conclude that the closely related keys can have a subdominant, dominant and relative function, for degrees IV, V and VI (F, G and A), respectively .

Okay, these are some closely related keys that we can use to make modulations.

Relatives of the Closely Related Keys

Another option would be to get relative tones of degrees IV and V (since the relatives have the same notes as these). Let’s check them out continuing with our example:

As expected, these scales have the same notes as the F and G scales. Therefore, they also have only one accidental note in relation to the C scale. These are called relatives of the closely related keys. Looking from the tonic’s point of view, they are degrees II and III of the major key of C (D is the second degree and E is the third degree).

The parallel closely related keys, in turn, are parallel keys. Let’s check the C major and the C minor scales:

Great, we already know who the closely related keys are. The practical use of this, as we mentioned at the beginning, is knowing how to choose where we can modulate a song. When choosing to modulate for a closely related key, we are choosing a tonality that has some affinity with the main key, and this will result in a transition which is better accepted to the ear.

Sometimes, the composer’s idea is to radicalize and turn harmony upside down, but you need to be aware of that. Try not to introduce modulations which are too abrupt if the idea is just to diversify the harmony. Try the closely related keys first.

We will work on modulations in the next studies, so you can apply these concepts. For now, try to feel the flavor of the closely related keys in relation to the original key. Get used to this idea, because then your ear will be sharp enough to recognize not only the fact that the tonality has changed, but also where it went. Find a summary of this chapter below to facilitate your study and training: 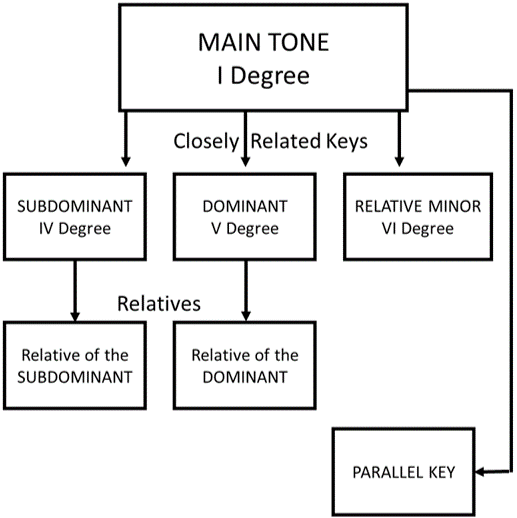