Now that we’ve learned how to spice up the blues in improvisation, the time has come to explore the harmony of blues.

We will now see the origins of jazz, how it was formed from the structure of blues. Even for those who don’t like the style, this study is very worthwhile, because the structure of blues allows for countless substitutions,  progressions and harmonic works, so many that would not fit in a single book.

Well, let’s start with the basics. The definition of blues, as we’ve seen, is linked to 12  very determined bars. See an example of blues in A below:

We already know this structure, it is one of the most basic blues arrangements. We will “have some fun” with this harmony, using some concepts that we already know.

First, let’s work on the fourth bar. Notice how we start from A7 and fall into D, that is, A7 is acting as the dominant V7 in D. We can make this progression more fluid by turning this passage into a progression II – V – I. For that, in the fourth bar we will place the Em7 chord before A7. Thus, we are left with Em7 – A7 – D.

Now notice that we are two consecutive bars in D7 (fifth and sixth bars). Since we are going to return to the first degree in the seventh bar, it’s nice to place a diminished chord in the sixth bar. We will use the diminished that serves as a substitute for D7. What is it? We have already studied this! It is located a semitone above the dominant, that is, it will be D#°.

See how the structure now with these first changes below: 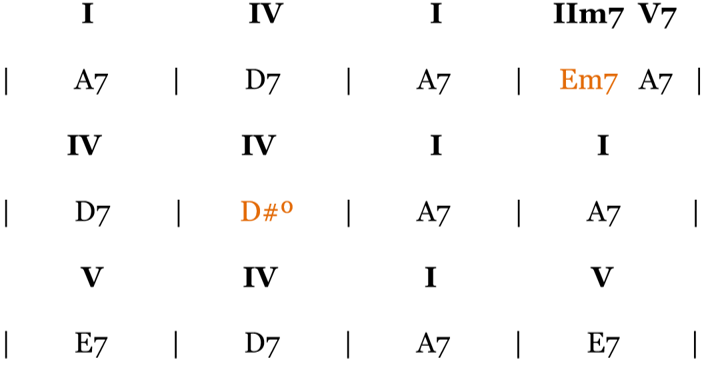 Very well, it is already getting interesting! Now we will be a little more daring. From the eighth bar (which precedes the “climax” of the song), we will make a sequence of dominants.

We can further expand this idea by playing the dominant V7 of B before that, which is F#7. So, our little game here will be to place F#7 in the eighth bar in place of A7, because A7 is already present in the previous bar, and then we continue this sequence of dominants by placing B7 and E7 in the ninth and tenth bars. See how it looks:

Very well, our blues is already changed quite a bit. We are leaving the traditional blues sound behind and walking towards jazz. Let’s continue this tour! We already know that, in the major key, the first degree has the same harmonic function as the third degree (IIIm7).

In fact, in practice, these degrees have two notes in common. Compare A major and C# minor. Both have the E and C# notes. So, we can try a replacement.

It would be very pertinent to replace A7 with C#m7 in the seventh bar, since the next chord in the sequence is F#7 (which is acting as V7 of B). Thus, C#m7 would serve as the second degree of the progression II – V – I formed by C#m7 – F#7 – B. So let’s make this change from C#m7 in place of A7 in the seventh bar and do the same in the 11th bar: